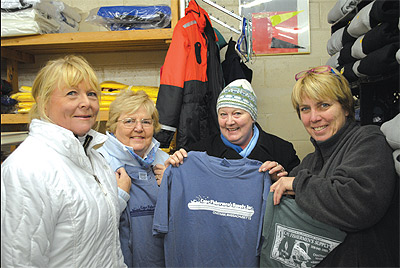 Hansen advertised the event on her personal Facebook page as well as her store’s, and sent out an e-mail to everyone in her address book. The goal was to have 20 people commit to spending at least $20, even though they would not know where they were going to shop until they arrived at a pre-determined meeting place.

“The biggest thing was to keep it a secret,” she said. “We didn’t want anyone to know where they were going.” Eighteen people, including a couple of youngsters, showed up at the Depot Road
parking lot of the elementary school, just down the street from Cape Fishermen’s Supply, and walked to the shop. Three more arrived shortly afterward, having been texted the location by Hansen once the cash mob was underway.

“It turned out exactly as expected, if not better,” Hensen said. “Everybody found something. They had more to offer than anybody knew about.”

Libby was caught “totally off guard,” she said.

“I thought it was awesome,” Libby said. “It’s the doldrums time of the year. I think it’s a great way to support community businesses.”

“It felt so good to make a difference,” Hansen said. Afterward, some of the participants stopped at the Red Nun for a snack and a drink, thus benefiting another local business.

Hansen already planning the next cash mob, which will probably be held on Feb. 11. It will have a Valentine’s Day theme, she said, but the chosen shop will be one that would not normally be associated with that holiday (in keeping with the rules of the event, she declined to reveal the location). She hopes to get at least 25 people to participate in the second cash mob.

Two of those are likely to be Libby and his wife. “It was a lot of fun,” he said”That was one of the things I liked about it.”

To participate in the next cash mob, contact Hansen at barbarajean1@comcast.net, or call Millie’s General Store at 508-945-2900. E-mail Tim Wood at twood@capecodchronicle.com

by Tim Wood
CHATHAM --- It was a typical slow Wednesday in January last week at Cape Fishermen’s Supply when, without warning, 21 shoppers descended on the Depot Road store.

Each person spent at least $20 in the store, which caters to commercial and recreational fishermen but carries a wide variety of general merchandise as well. Sales of about
$400 in half an hour was a welcome infusion at this time of year, said
owner Dave Libby.

“It was a nice treat. It was nice to have people come in and check out the store just out of the blue,” he said.

This was Chatham’s first “cash mob,” the first of what promises to be many, if the success of last Wednesday’s social media-organized event is any indication.

“Everyone had such a great time,” said organizer Barbara Hansen, owner of Millie’s General Store. “And there’s a benefit to a business, to get that little shot in the arm on a cold Wednesday afternoon.”

Flash mobs, impromptu gatherings of people coordinated via social media like Facebook and Twitter, are pretty well known now, but cash mobs are a new phenomenon. Apparently originating on the west coast, it’s a melding of social media with a love of shopping, with the goal of helping to bolster small businesses.

Hansen first read about cash mobs on Facebook, and then followed a link to a story in the Wall Street Journal. The concept sounded interesting.

“I just said that would be perfect for our little downtown, just exactly what we need, a little boost,” she said. She contact Chamber of Commerce Executive Director Lisa Franz and Chronicle Advertising Representative Amy Tagliaferri about the idea, and began developing a list of contacts as well stores to target. Criteria included being locally owned, open year-round, a supporter of
the community and having merchandise in the $20 price range that would appeal to a wide demographic.